Chris Duffy is the bassist of Denver-based band the Magic Beans. Chris is one of the most well-respected bassists on the scene, as well as one of my favorites. If you listen to the Beans’ recent album, Casino Cabaret, you’ll hear Duffy’s bass prowess exemplified in songs such as “Inventor”, “Casino Cabaret”, “Mr. Scientist”, and my personal favorite, “Hanky Panky”. He knows how to keep a groove going! Check out some more of Chris’ playing in this Beans set from their Fox Theatre show last March. 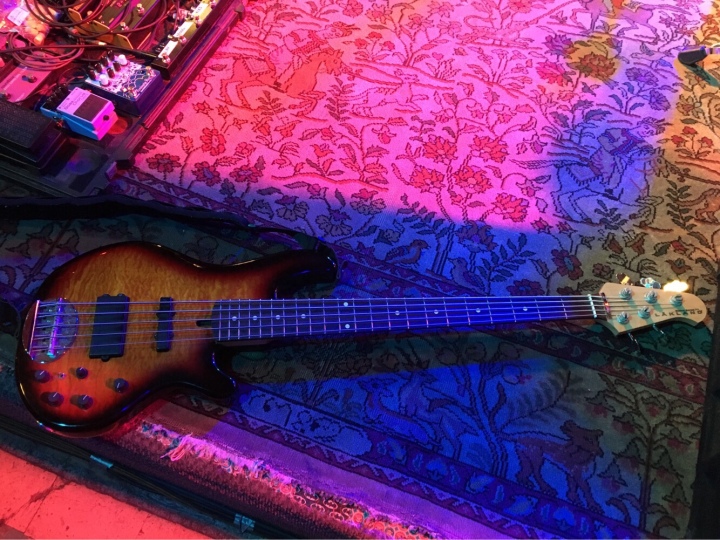 Behind the Gear: Did you take any inspiration from some of your favorite artists when you were building your current board? Who are some of your inspirations as a bass player?

Chris Duffy: As far as bass players go, Dan Kurtz of The New Deal totally changed my approach to playing bass through pedals, specifically in a livetronica/dance setting. He is the master. When I saw his foot riding expression pedals for an entire show, some crucial things clicked. My use of a sub-octave/ distorted tone through the Moogerfoooger Low-Pass Filter is directly inspired by Dan. No one manipulates their live bass tone so freely on this scene. Except, ya know, Squarepusher (laughs). THAT dude is a mad scientist. As far as I can tell, his current pedal board is some obscene number of expression pedals controlling a few rack-mounted effects processors. If you or anyone reading knows the details on Squarepusher’s rig, please let me know, it’s fascinating. Or Dan Kurtz’s, for that matter. What a bunch of hyenas. I’ve only been interested in Squarepusher’s rig since seeing Shobaleader One videos a year or two ago, but Dan Kurtz has been influencing me since I was 16. Growing up listening to and emulating Flea means I’ll always have some envelope filters in my rig. The Source Audio is nice cause it can save 6 settings, which I’m always experimenting with. It replaced my Pigtronix EP-1 Envelope Phaser, which I got after working a Turkuaz wedding and talking with Taylor Shell. I really need to fix that pedal, it’s the tits. I wish it was smaller!

BTG: What is the one pedal on your board you couldn’t live without?

CD: Definitely the Moogerfooger MF-101 Low-Pass Filter. I use that pedal on literally every jam the Beans go into. I probably over use it, but whatever. It gets me fired up, and that’s important in a jam band, since the flow of energy between the artists and the crowd is so fluid and tangible. If you’re having fun, they’re having fun, and vice-versa. I want to add more expression pedals for it. That’s the great thing about Moogerfoogers, you can control almost every knob on the thing with a designated expression pedal. In a perfect world I’d have four or five on my board, but that takes up so much room. Right now I only have the one controlling the filter cutoff frequency. In the future though… I’ll be Squarepusher!

BTG: What are some of your favorite pedal combinations to play with?

CD: Octave through envelope filter sounds are always fun. I’ve been loving the Markbass Synth through the MF-101. Throw some delay on that and suddenly I’m an EDM producer. Speaking of delay, I’m working on a sustained lead tone for taking melodic solos higher on the neck. Some sort of compression/distortion pedal that I have yet to find, through the MF-101, into the Avalanche Run, maybe some chorus. The Avalanche Run is a perfect delay/reverb for bass. That tone knob keeps things from getting too muddy. God I love that pedal.

BTG: Do you remember the first time you were exposed to the use of effects pedals?

CD: Flea’s tone on the All Around the World intro led me to buy my first pedal, a Boss overdrive. Then I got into jam bands, Kurtz, Brownie, Ryan Stasik, Mike Gordon; I started copying everything those guys were doing. As I said, The New Deal changed everything.

BTG: What drove you to pick a Lakland to use as your main bass?

CD: Ryan Stasik of Umphrey’s McGee. It’s a Skyline 55-02 Deluxe that I bought new in 2006 without even trying one, just because I loved Stasik so much. I’m lucky that they sound so punchy and play perfectly, or else I would have been f***ed! Laklands are the truth. But don’t be like teenage Duff. Play before you buy!

BTG: Who are some of your favorite contemporaries on the scene currently?

CD: Man, there are so many great players out there. On the Denver scene, Tim Philpott has got to be my favorite. Everything he plays is so in the pocket and seems well thought out, yet he stays creative and interesting. Another killin’ Denver homie is Tucker McClung, who is simply fearless and slaps like a mothertucker. On the bigger picture, Richard Bona really gets my blood pumping when I hear him. His Jaco-like pocket 16ths are so bouncy and energetic, it makes me run and pick up my bass and start running syncopated afro-beat rhythms to a click. His playing with the Joe Zawinul syndicate makes me want to do laps around the house. Who else, Thundercat of course. I listen to a lot of techno and house DJ sets, lots of the Boiler Room videos get me going, especially people like Solumun and other folks on the Diynamic label. On the jam scene, there’s just so much talent. It’s like with every note you can hear people sorting through all the amazing stuff they see on the internet, and we’re all just mushing it into some ever-developing Mother-Groove. I guess thats what music is now, right?